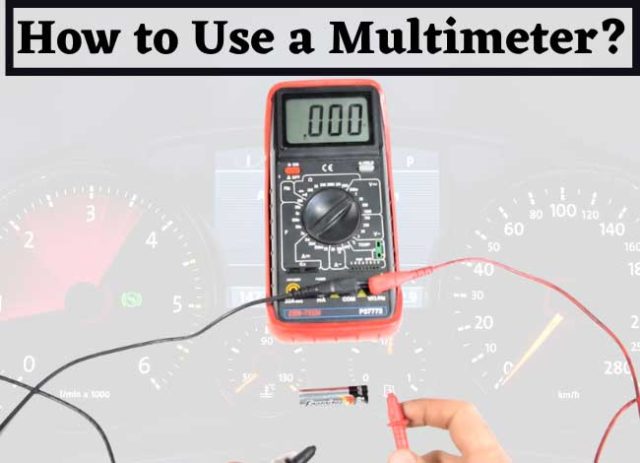 A Multimeter is a vital tool that is used by electricians and engineers to measure electricity. Unlike other tools, a multimeter can be used to perform various tasks such as measuring current, resistance, voltage, frequency, capacitance, continuity, and temperature. A professional electrician will always select a quality multimeter with useful features.

My question is; do you know how to use a multimeter? With so many types of multimeters on the market, there are some that are easy to interpret and use, while others need expert knowledge. But still, there are common features that almost every multimeter comes with. We’ve come up with this article to help you know the different parts and how to use a multimeter by testing the main three things in electricity, which are voltage, ohmmeter, and ammeter.

Step one: Understand the multimeter and its parts

Most of the time, the voltage to be measured has a value that is unknown. Hence, the highest range possible is chosen so that the meter circuitry and movement will not be harmed by a voltage greater than expected.

There might be various volt scales with different maximum values. The range selected by the knob defines which voltage scale to read. As a matter of fact, the maximum value scale should coincide with selector knob ranges. Such a scale is accurate anywhere along its length.

It depends on your location as some outlets have volts of 120 to 240 like the USA, while other places have 240 or 80 volts. Place both the black and red test leads into the outlet; it should grip it as it does with the plugs. A voltage of near 120 or 240 should be indicated.

Then, rotate the selector knob to the lowest range given, which is greater than the voltage shown (120 or 240), in the case of the USA.

Place back the test leads, and the meter might show between 110 or 125 volts this time around. The range of the meter is vital to get precise measurements. The correct mode should be set, and failure to do that may lead to the pointer not moving. Also, you can attempt both modes if the pointer isn’t moving.

When making tests. Try as much as possible not to connect and hold the two test leads at ago. This may lead to burns or even injury.

Switch the multimeter on. If the meter measures resistance in ohms, it can’t measure continuity because resistance and continuity are reverses. When there is small resistance, there will be great continuity and vice versa.

When the test leads are not in contact with anything, the pointer of an analog meter will remain at the left position. This shows an infinite amount of resistance. Also, it is right to say there is no continuity.

Connect the test leads with the black one in the “COM” port and the red one in Omega or “R” port.

The meter pointer should move to the right side. Identify the “Zero Adjust” knob and rotate it so that the meter shows “0” or close to zero.

Change the range of the meter to R X 1. Zero the meter once more for this range and repeat the process above. Inspect how the meter did not move as far to the right as before. The scale of resistance has been changed so that every number on the R scale can be read directly.

Set the meter to the greatest R X value possible and zero the meter. Loosely hold a test lead in both hands and read the meter. Verify the resistance is reduced.

It is really vital that the test leads do not get in contact with any other device rather than one being tested.

First of all, you’ve to know if the circuit is ac/dc by measuring voltage first which you’ve read about above.

The meter is needed to measure the same mode, which can be ac/dc amps as the voltage in the circuit. So, if the circuit is dc and the meter only measures ac, then you should not proceed.

It is great for home use. It was created to measure the current through a 4700-ohm resistor across 9 Volts DC. Perform the test by placing the black lead in the “COM” port and the red one in the “+” port. Then, shut off the power to the circuit. Open the part of the circuit that is to be tested. Place the meter in series with the circuit in a way that it completes the circuit. Check the polarity. Current moves from positive to negative and sets the range of the current to the greatest level. Put on power and adjust the range of the meter downward to enable accurate reading of the pointer on the dial.

To avoid this from occurring, constantly utilize the higher range measurement protected by, the higher fuse rating and be very careful.

If you’ve been finding a multimeter to be difficult to use, you can now follow our steps above to properly take tests and measurements on your electrical appliances. 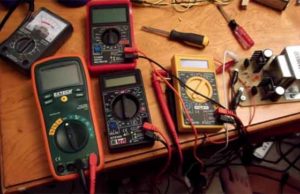 Best Multimeter Reviews 2022 {For the Money}

Mark J. Garvey
3
A Multimeter mostly used to test the electrical devices and can measure AC/DC voltage, current, resistance, continuity, and temperature. It doesn't matter you are...